A Therizinosaurus done for Art Evolved.... 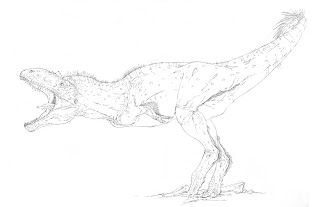 And a new Tyrannosaur, Bistahieversor, found in New Mexico, right next door to me:) I actually saw the skull when I was at the NMMNH, but my camera died when I got there. Fricken sucked!!! But this is the dinosaur I did up for Draw a Dinosaur Day. It's already been uploaded!

Tomorrow is Draw a Dinosaur Day

I've just been reminded of this thanks to Dinosaur Tracking. It's a day when anyone and everyone is encouraged to simply draw a dinosaur. It doesn't have to be good, just a dinosaur. I'm going to do it myself and I'll post the image here.

A bit of additional info at Art Evolved. They host a draw a prehistoric beast drawing event every few months. Therizinosaurs are next. I've done one just need to scan it, so you might get 2 new drawings tomorrow:) 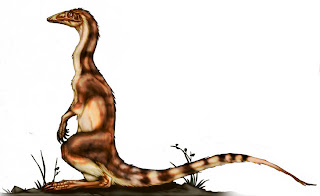 A new paper has given us a first look into dinosaur coloration! Here is a news article and here is a blog post over at Theropoda that will explain it far better than I.

I've modified an old picture to try and match it up. And yes the hands are wrong... or are they;) 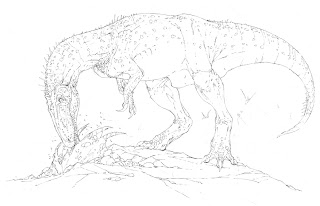 Some of these are now outdated. A Chilantrasaurus with a carcass. This beast is now thought to be related to Megaraptor. See I told you this was outdated;) 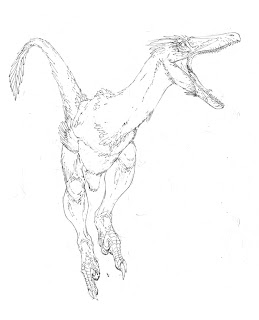 My first Austroraptor, I didn't like the feathering on this one. 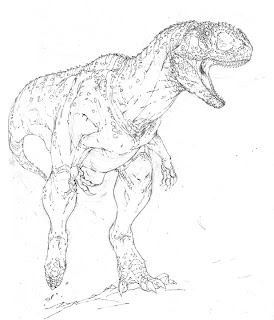 Rugops, an early Abelisaur from Africa. 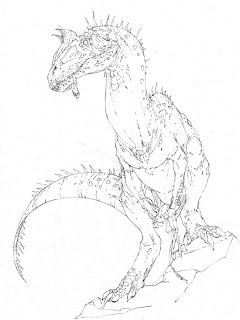 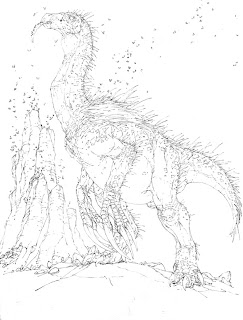 My first Therizinosaurus, I have a new one that I need to scan, hopefully in the next few days. 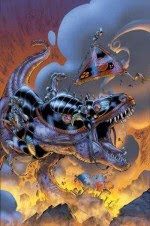 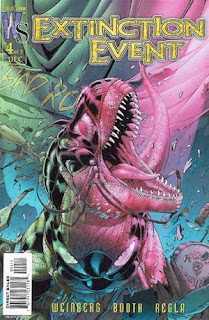 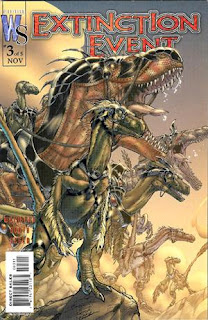 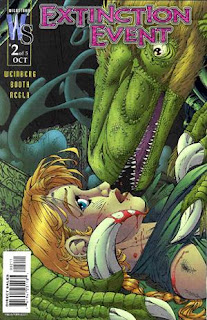 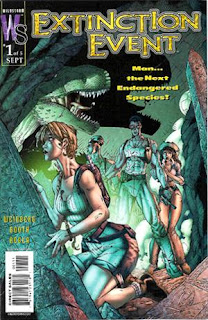 This was a comic I worked on in 2002 I think. Not my best work. But a more typical comic book style. The story was about sentient Dromeosaurs that saw the end coming (giant meteor) and built cryofreezer things for them and their civilization. They were supposed to unfreeze after a few hundred years but the machine took some damage and didn't unfreeze until a small earthquake 'fixed' the problem. I don't really remember much more, I had some problem with the story and the science, which were changed for the proposal but the writer decided to put them back in. It might have been cool, but once again they had to focus on the people;)

I had to bitch at the colorists after that green Dromeosaur thing on cover 2. They couldn't pull off anything but green and brown so no cool colors. Just remember I had to draw 22 pages of this stuff on a short amount of time so be gentile;) 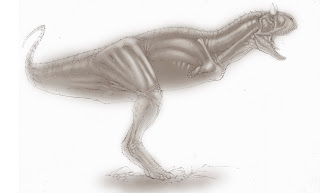 Blogger is acting funny so I hope this turns out right.

I was told by a friend of mine that several people have said that my style is 'comic booky'. To that I say, Duh!, I'm a professional comic book artist, that's my job! I don't switch to a more realistic style because sometimes it's hard to switch back, and like it or not, comic book anatomy isn't always the same as real life. I do try to keep the anatomy on the dinosaurs as correct as possible but I'm sure some sort of comic style shines through.

I'm only bringing this up because on these people said that the 'bumps' I do are completely without reason, I just make it all up! And since someone in the comments also asked about it, I thought I'd do a post on it. Sorry it took so long, the new computer screen is playing havok with my head.

So on to the reasons, and the reason is the beastie, Carnotaurus. Well, he's part of the reason, the other things are the current feathered dinosaurs finds from China. Carnotaurus is one of the only decent large theropod skin fossils, they have most of a side (I can't find any of the info online, for some reason it's so common knowledge that it isn't important enough to put on the internet!) I do remember an article I read about the fossil impressions, typical dinosaurs skin, circular scales with occasional larger scales, with larger bump like scales in rows down the length of the animal. I don't draw all the little scales, it would take forever and I have yet to find any filter in Photoshop that will do it so I just concentrate on the larger stuff, following the Carnotaurus skin that's been found. I do a few longer scales on the heads of some of the theropods in keeping with current reptiles scales and bird feather placements. Since it is now believed that scales did not lead to feathers, these 'scales' are sort of a feather precursor, made up but not out of the realms of possibility. I'm quite sure feathers didn't just pop up fully formed and ready to go;).

As for the feet and hands, For those I use actual bird reference, or chicken if you want the absolute truth. We feed our dogs chicken and sometimes they have feet still attached. I've seen plenty a chicken foot so I use those for theropod feet.

I hope that makes sense. 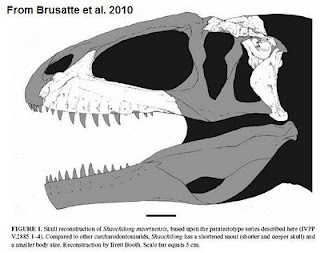 I pulled the image from Theropoda, my file's on the other machine and I'm far to lazy today to pull it. I drew this for Steve Brusatte over the summer, the paper came out today, so this is my first actual scientific art for a paper. Coolness;)

Thanks agian to Steve for letting me do this, it was quite fun:)

Recently a new paper has re-examined the first described dinosaur, Megalosaurus. Some of the changes appear to make the head much shorter and taller, unlike the longer Torvosaur like head used in the past. So based on that and one of those skeleton drawings with the flesh shadowed on the outside I decided to do a more modern drawing. After workin gon it for a bit I noticed that it looked a lot like an Abelisaur. Now I'm not saying it was, just that it had that sort of feel. Convergent evolution, an early attempt or something more? Spooky, yes?!

Up next a new Carontaurus and an explanation as to why I do the bumps I do;)
Posted by Brett at 9:20 AM 6 comments: