Cruxicheiros (was I can't remember the name!)

I know I'm not completely insane. I wrote it down the name but now I can't remember were I put it. A largish Spinosaur/Megalosaur from the mid to late Jurassic of England. If anyone has any idea what the name of this beastie is please let me know! 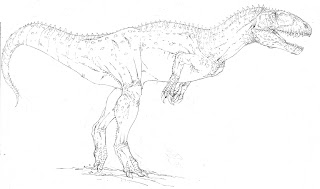 Update: Thanks to Andrea Cau of Theropoda fame for figuring out my scambled ramblings. More when it's colored!

Spinosaurus running in the water

A few weeks ago after the horribly done Clash of the Dinosaurs over on the Discovery Channel they aired a show called Monster Revealed (or something similar I can't quite remember.) Anyways the special was about Spinosaurus. In general, it wasn't that horrible, they kept saying Spinosaurus was 60 feet but the animation clearly showed something with a head about 12 feet long (whick would put the animal around 80 feet or so.) It seriously dwarfed the Carcharodontosaurus they used along with the 30 foot Rugops (which it picked in it's mouth.)

The reason for the blogpost and image? They mentiond that one of the newest ideas was that the sail was used for hunting/fishing. Something similar to what I had mentioned earlier this year, I couldn't find anything about it online and knowing the track record of these dino specials I wasn't sure if someone might have happened upon my blog and missread it. They credited it to Dal Sasso who has done some fo the most recent work on Spinosaurus. This idea was slightly different than mine as it was saying the shade the sail provided was to attract the fish, mine was that the sail was used to help see the fish. I like the new idea myself so it's cool to think I might have provided an insight or at the very least came to a similar conclusion. Of course I might really be totally delusional in this;)

More dinos soon, I need to find a new Megalosaurus I drew (This new version based on a new paper makes the animal look more like an abelisaur.) A holiday image and a new spinosaur/megalosaur.