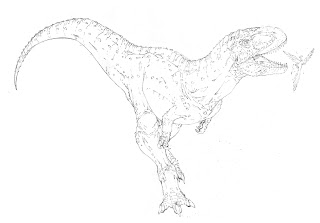 Years ago Gregory S. Paul put forth the idea that the Spinosaurs evolved from animals like Dilophosaurus. They do look a lot alike, but current thinking has the spinosaurs evolving from animals similar to Torvosaurus (I'm saying Torvosaurs since I have no idea what's going on with the megalosaurs right now.) But could the similar look be the result of convergent evolution? (animals evolving similar appearance because they preform the same function, like dolphins and icthyosaurs, or Thylacines and the dog) Were Dilophosaurs also fish eaters? I have no real idea but a current study that tests isotopes in teeth might be the answer. They finally published a study on the teeth of spinosaurs that shows they were more aquatic in there habitats than other theropods, or at least most other theropods.

So does the similar look of Dilophosaurs hint at a Spinosaur like life style? Most likely not, they appear to just be ramped up Coelophysids. But one never knows, maybe we'll find a Dilophosaur with fish in it's belly like the British Baryonyx:)

Deinonychus (modified from new information that I don't like;P)

After reading this excellent post over at Theropoda, I decided to do a few more feathered theropods. While not as large as the 'carnosaurs', Achillobator got up to 20 feet (that's still pretty good sized) while Deinonychus might have hit 11-12 feet.

More tomorrow, I have a Dilophosaurus and a Abelisaurus to put together and clean, I really don't like the new scanner>:| 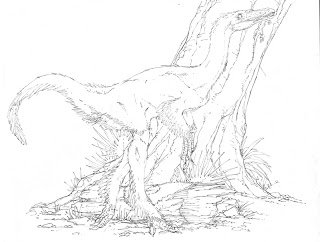 So far the earliest Alvarezsaur found. It's also fairly large for this type of Dinosaur, coming in at around 8-9 feet. More info here!

I'm still messing with the new scanner. It's not being exactly cooperative. In fact if it possible to hate a machine, I hate this one. Sure it scans faster than the old one, but it keeps giving me these really dirty dark spots that the other one didn't. Oh well.

I actually didn't realize I colored it similar to the new find of colored dinosaurs until I was about done. I prefer this color for more simple colors so I use it when I'm moving quickly. I was trying to go for a more watercolored look, but Photoshop can't really do that so it's just a quicky. Oh well, maybe next time I'll get closer.